Jacquelyn Brown is a troubadour harpist, singer and songwriter from London, Ontario Canada.

She is also a practitioner of harp therapy, one of seven in Canada trained to date. In 1999, she was named Internet Consultant for the International Harp Therapy Program centered at the San Diego Hospice in California, USA. Jacquelyn is a member of a Reiki healing team. She is an artist in residence in the historic St. Paul's Anglican Cathedral in London, Canada.

She has been involved in the arts since the age of three, when her parents enrolled her in dance classes as treatment for rickets. Little did they know this therapy for strengthening the legs would open up a whole world of creativity for their daughter.

Throughout her elementary and secondary school years, Jacquelyn studied dance extensively in many forms -- acrobatics, tap, ballet, jazz, modern and baton. She toured extensively in Canada and the USA as a contortionist. Also, Jacquelyn had her own touring majorette corps. She became an Ontario gold medalist in floor exercise, and more recently, an 11-time gold-medal winner in ballroom dancing.

Earliest in her career, Jacquelyn served as head coach for the Leamington Gymnastic Club, as well as founder, program director and head coach of the Leamington School of Modern Gymnastics. She also taught health and physical education at a Mennonite secondary school in Leamington, Ontario.

During a five-year residency in Kansas, Jacquelyn developed her interests in sacred dance performance and choreography. She performed as founding member of Feet Of Fire, a sacred dance troupe, and presented numerous solo and group performances and workshops in church and conference settings in the United States and Canada. In 1989, she began graduate studies with two pioneers of American sacred dance, Carla de Sola and Cynthia Winton-Henry, at Pacific School of Religion in Berkeley, California. After returning home, Jacquelyn was introduced to the harp which has taken her away presently from her MA dance studies.

While living in the USA, Jacquelyn worked with the drama departments of Tabor College and Bethel College in Kansas as a choreographer for college productions and taught dramatic dance classes.

Jacquelyn became intrigued by the harp in July of 1989, while visiting the Home County Folk Festival in London. There she plucked her first harp strings, not imagining that, just five years later, she would take the festival's main stage as a featured performer and four years later would perform as part of their 25th anniversary celebrations.

Jacquelyn has performed at the Stratford Festival and many folk, Celtic, busker and children's festivals. Also, Jacquelyn's music is popular at benefits supporting health and women's issues. Jacquelyn was a featured performer at the Canadian Folk Harp Festival in Toronto and she opened the National Clay and Glass Gallery in Waterloo with her music. She has been featured on regional and national radio and television and video productions.

Aside from her musical credits, Jacquelyn produced and performed the musical soundtrack for the award-winning video Not a Day Goes By.

In 1995, Jacquelyn Brown was named artist in residence at The Cathedral Church of St. Paul, in London, Ontario. This appointment is in the area of sacred dance, harp and voice at this historic cathedral, blending art, music and spirituality.

More recently Jacquelyn has trained in pastoral education and harp therapy and presently combines her transition skills in the area of harp therapy in settings that include the three great natural transitions of life, birthing, weddings and dying. She also finds time to play the concert and festival stage.

Presently, Jacquelyn's music can be heard on five different CDs.

Jacquelyn's first loves have always been movement and music. They continue to motivate her art. At the root of her being are the love of family and the soul of a spiritual traveller. Jacquelyn invites other spiritual pilgrims to join her, through concerts or recordings, on a journey of the heart. 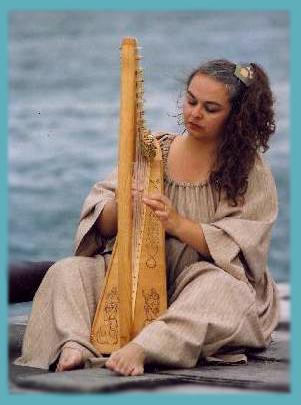 Jacquelyn was known as a child as Jackie Brown, as an adult Jacquie Brown. However, she prefers to be called Jacquelyn. Also, "troubadour" is the Canadian spelling of the word that usually appears in front of Jacquelyn's name. Most other countries spell it "troubador" without the extra "u".